But first, of course, some backstory.

I’m pretty sentimental about clothes. I remember what I was wearing for lots of big events in my life – first date with Husband (which makes me think of another story – I’ll save it for another day), when I moved into my college dorm, when we got engaged, what I wore on the way to the hospital when both kids were born – you get the idea. I also sometimes remember what other people wore – particularly Husband.

He had this shirt when we were dating. It’s one of my favorites. And he was wearing this shirt the night he proposed.

So when I saw it in the giveaway pile a few weeks ago, I grabbed it and added it to my project pile. I mean, it’s still in great shape (ahem, 17 years later). I thought about cutting it down into a smaller size for Big Boy, but then I remembered seeing a little girl’s dress made from a man’s shirt on Pinterest.

And then, Big Boy was invited to a Mustache Party – bow ties optional. Yes! A bow tie for the boy and a dress for the girl. Perfect! I wouldn’t have to say goodbye to my favorite shirt – at least not right away. And who am I kidding? You know I’m saving the better stuff of the kids. Let’s hope this project is some of the “better stuff”. 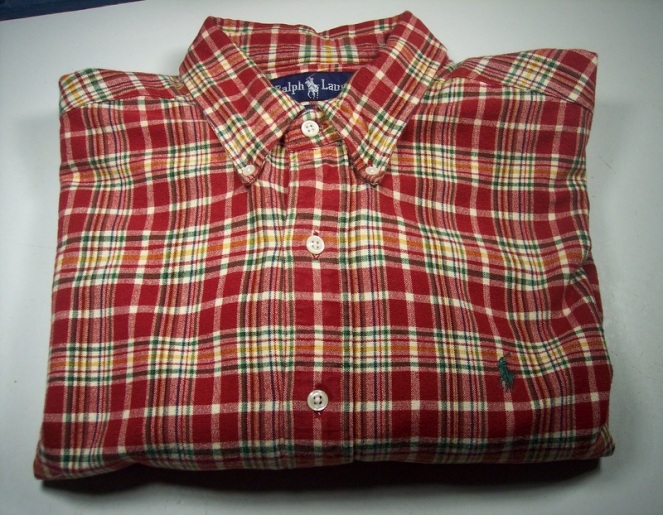 Here’s how it started. You know I love some nicely folded shirts. If I married Husband because of his ironing skills, he married me for my folding skills. (My mom is the Queen of Folding, and I worked in a little clothing store the summer we got married. And I definitely have some Type A tendencies. I come by it honest.)

I chopped off one of the sleeves to make the bow tie – the party was Saturday and I got started on it Saturday morning. I used this tutorial, and I played around with the measurements a bit to make a larger bow.

The bow turned out really well, and the party was fantastic. BB wore his mustache for about 3 minutes, but really, it was just so stinking cute.

Now on to the dress.

I’ve seen several things on Pinterest lately about taking an oxford shirt and turning it into a dress. I tried this one, but turns out you have to buy a pattern.

I looked at this one, and while it’s really cute, it’s not quite what I wanted.

So I found this shirt in Baby Girl’s closet that has a similar shape to the dress I was envisioning. I started taking measurements and made my own pattern.

THAT’S RIGHT, FRIENDS. After a 31 Days, I’ll attempt anything! 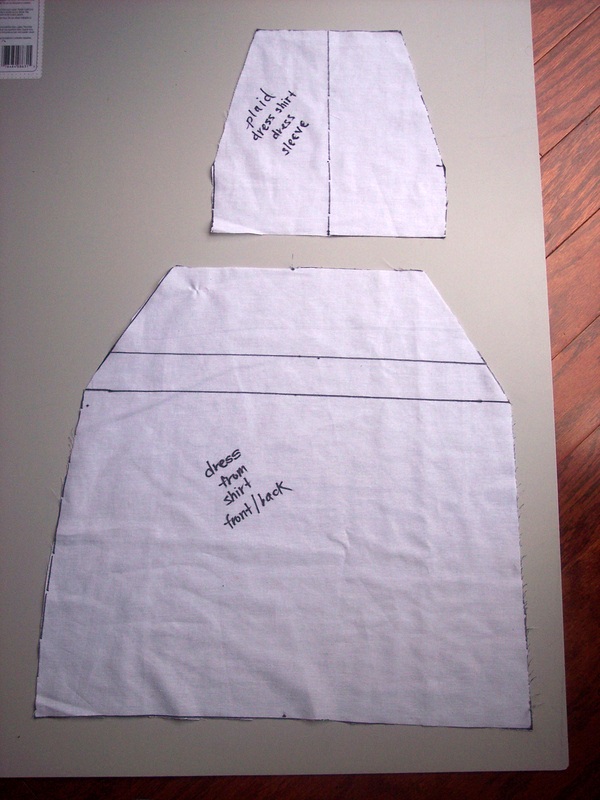 This dress really only took 2 pattern pieces – the front and the back are the same, and then the sleeves are the same. I used some scrap fabric from the garage (I think it’s even an old sheet), and using the measurements from the original shirt, I used a Sharpie to sketch out what I thought the pattern pieces would look like. You can see above that there was some trial and error (extra lines drawn in until I got it like I wanted it). I also apparently used trial-and-error to think of a name for these pattern pieces. (“Plaid dress shirt dress sleeve” – what does that mean exactly??) 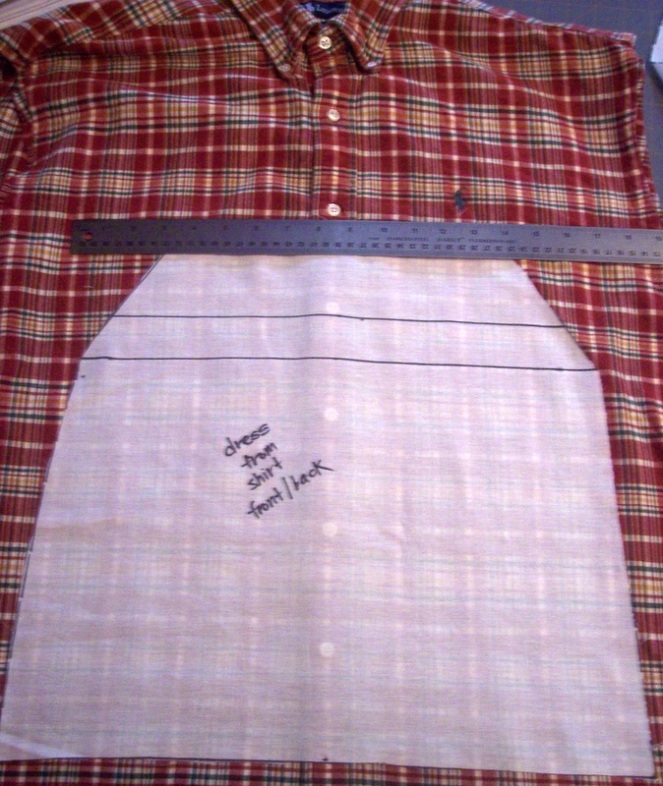 I placed the pattern pieces on top of the shirt and cut through both layers to get the pieces. Both sleeve pieces for the dress came from one sleeve of the shirt. Good thing, since I had already chopped the other one off for the bow tie.

Looking at these 4 simple pieces makes this look deceptively easy. Not that it was TOO challenging, but there were some tricky parts. 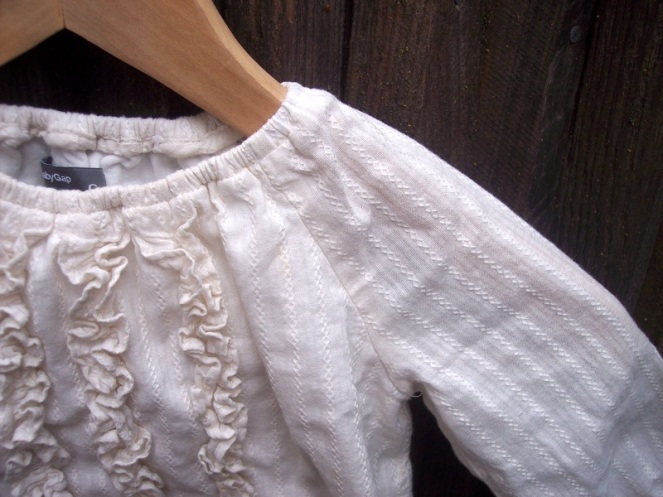 So I started by pinning one sleeve to the front piece along the slanted line and sewing that together. (I didn’t get photos of these steps – I still get so into the project that I forget I’m supposed to be documenting it. This slanted arm seam of the shirt shows which part I mean.) I repeated with the other sleeve, and then I attached the back piece to both of the sleeves. I pressed open the seams before continuing. Next I pinned and sewed the sides of the dress together and closed the sleeves from under the arm to the end of the sleeve. I pressed these seams open, too. 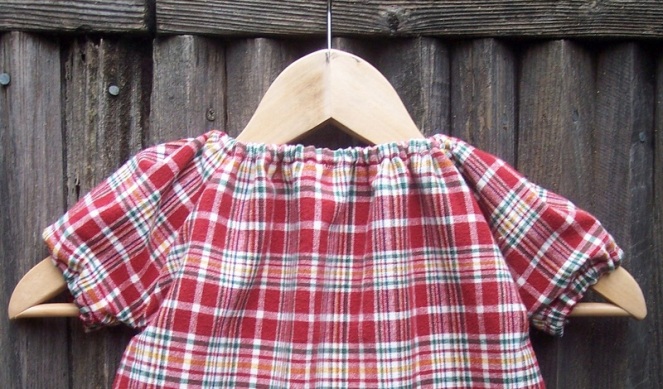 Next was time to create a casing for the elastic around the neck opening. You know I love sewing with elastic, so I’ve done this a few times, but the method in this tutorial from MADE was super helpful on this project – I know I’ve been doing it incorrectly for years (again, I’m no pro – anything I’ve ever sewn has been done by trial-and-error). Her method (dare I say how everyone ELSE sews elastic?) was easy and turned out beautifully. 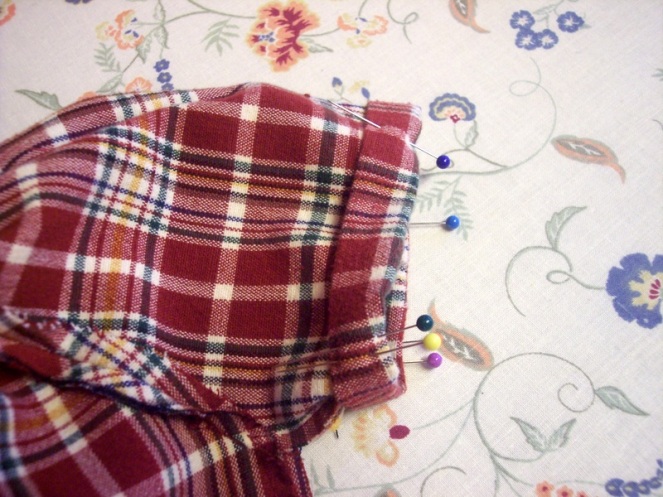 And now the trickiest part – the sleeves. I created the sleeve elastic casing the same way as the neck. But Baby Girl is still quite small, so these little sleeve openings are VERY small. The point of the iron barely fits inside to press down the folds for the casing.

And sewing was even harder. Even removing the base of the sewing machine wasn’t small enough for the sleeve to fit around, so I had to fold and bend and wiggle the fabric around to make sure I didn’t sew the sleeve closed. Success on both of them, amazingly enough!

Even though my prior method of sewing with elastic was faulty, I DID know to use a safety pin at the end to thread the elastic through. (It was easy on the sleeves, but it got jammed on the neck opening. I’m seriously considering getting one of these. The one episode of Pitchmen that I’ve ever seen was this one, and while I really don’t have any drawstring pants, I think this would be brilliant to use for sewing. Would you make fun of me?) 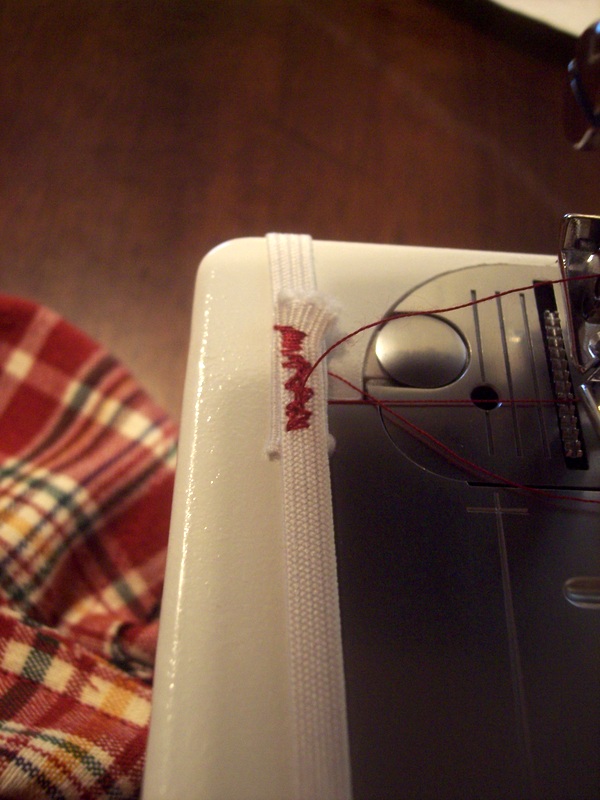 Once the elastic is threaded all the way through the casing, you need to sew the elastic together. Since this elastic is 1/4 inch thick, I just used a zigzag stitch back and forth several times. It’s not pretty, but it’s secure. Then I finished sewing the elastic casing closed. 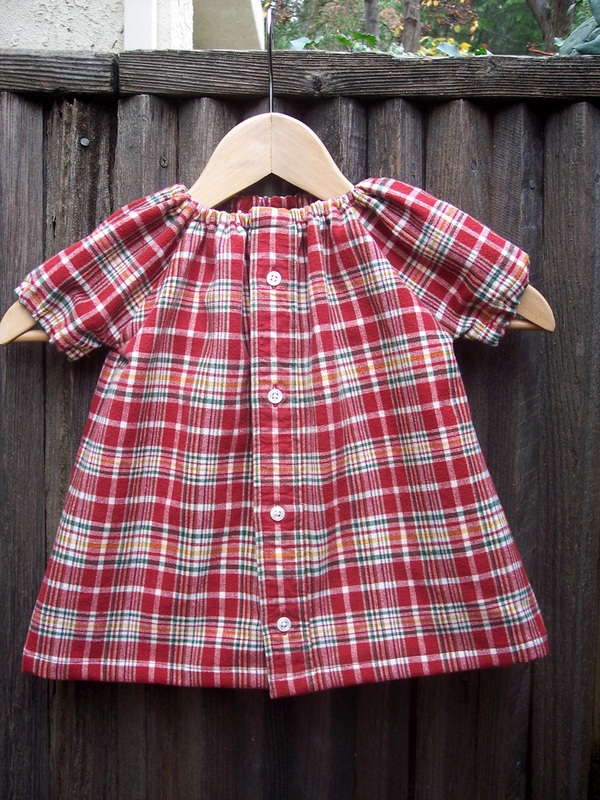 The final step was finishing the hem of the dress. When I first started sewing, my hems were TERRIBLE. They were never even, I sewed creases in them, and somehow the threads got jumbled up every single time. Now, they aren’t perfect now, by no means, but finishing the hem on this dress felt SO much easier. I think forcing myself to sew a lot for The Thrift Project has really improved my sewing skills. Maybe.

I love that the Red Plaid Shirt lives on! Yes, I’ve become one of those moms who wants to dress her kids in coordinating outfits. I’ve come to terms with it. I see a photo shoot in the near future.

8 thoughts on “The Red Plaid Shirt” 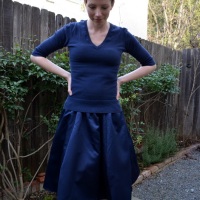 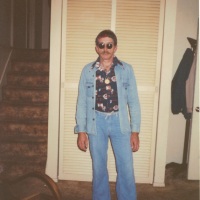 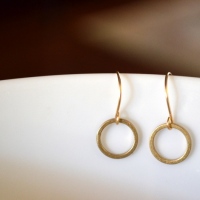