It all started with a leather jacket.

Well, I think it ACTUALLY all started with West Side Story. Or was it Hello, Dolly? I can’t remember – it’s been (ahem) a while. Either way, I took Drama in high school. (For the record, I was A-Rab from The Jets, a boy, but in the dance scene, where Tony meets Maria, I got to be a girl. Good times.) Whichever play it was, I needed to find some costumes, so I went to Goodwill. My friend, Stacey, was with me, and there we found a fantastic leather jacket. For $4. (I kept the tag in the pocket for the longest time, because I just couldn’t believe the price.) I can’t remember if we both just really liked it, or if I only had two extra dollars after buying costumes, but we decided to split the cost and share the jacket. Yes, in theory, we were supposed to take turns wearing it. I think we did a few times, but somehow, I ended up taking it with me to college. It even made the move to California with me. (And, funnily enough, Stacey moved to California for a little while, too. The last time I saw her, I offered her to have a turn, but she declined. Stacey, if you ever read this, IT’S YOUR TURN!)

After that thrift store find, I was sold.  I had always enjoyed garage sales, but they were only on the weekends, and they never had quite the selection to choose from as thrift stores have. When I went away to college, our college town had a Goodwill Super Store that I could stop by any day of the week! Amazing!

Today’s project is from another leather jacket. I originally bought this one with a Christmas gift in mind. I thought it would be perfect for this series, but if the recipient were to read this blog, it would ruin the surprise, so I’m making something else.

I saw this tutorial a few months ago for a fold-over clutch, and I even bought some bright pink faux leather to make it, but I haven’t gotten around to it yet. (It’s going to have an orange zipper, and it will be AWESOME!) So, as I was brainstorming other projects, this came to mind.

I used this tutorial as a guide, but I did a few things differently. I’ll hit the highlights here, but if you wish to try this project, check out the tutorial at Say Yes to Hoboken.

I started by cutting off the sleeves of the jacket. Yes, it felt wrong for a few seconds, but then it was okay. I ripped the seam of the sleeves, opening it up to a larger piece of leather. Since these are sleeves, the leather has been rounded and stretched a bit for a little while. (I’m guessing this jacket is from the 70’s, if not the 60’s.) So I quickly Googled, “Can leather be ironed?” Turns out it can, you just have to use a really low setting and place a brown paper bag between the leather and the iron to keep it protected. The things you learn by having a blog…. 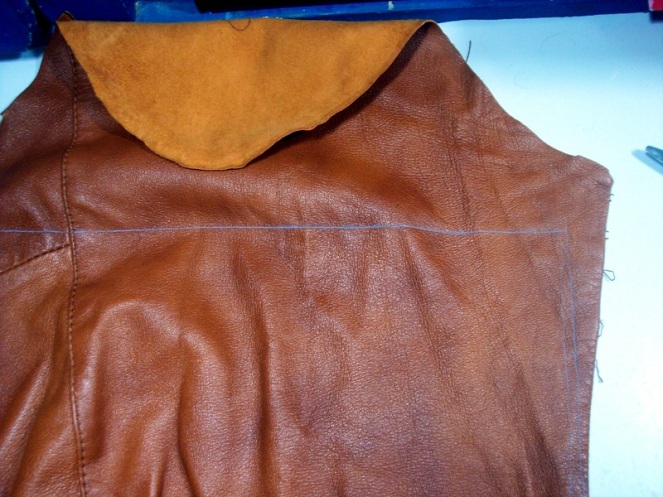 Next I made a template (using the 12″ x 13″ measurements suggested on the original). I used the template to chalk out a rectangle on both sleeves.

Then I chalked out two rectangles on some gray felt I had in my fabric stash. Instead of using the interfacing, like the original, I decided to create a felt lining instead.

Next I placed one of the rectangles of leather on top of a piece of felt and pinned them together. I repeated with the other sleeve.

I don’t have pictures of the next step because I was too busy focusing on sewing a zipper. MY FIRST ZIPPER! It wasn’t as scary as I thought, but I did have to pay attention to make sure I was attaching it to the leather and gray felt properly.

After attaching the zipper, I stitched the other 3 sides closed (make sure the zipper is partly unzipped!) and turned it inside out.

This is how it looks at first. You put your wallet, keys, and phone inside, zip it up, and fold the top over to look like this: 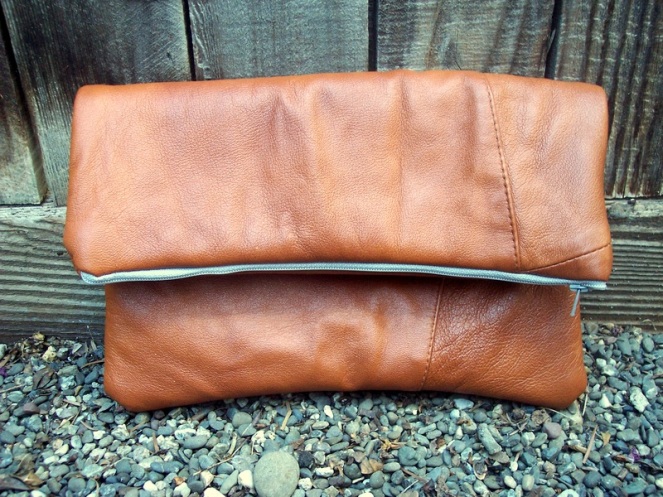 If yesterday’s Pebble Necklace is my favorite project, this is a close second. I love the way it turned out. And it was pretty easy. 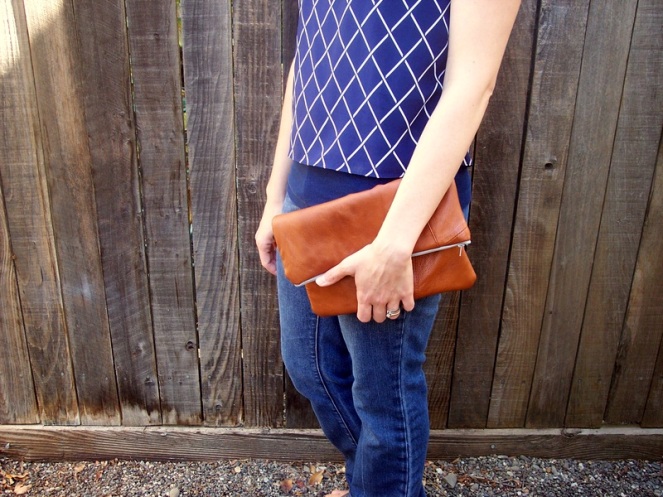 After 31 Days is over, the pink clutch will be my first “non-thrift” project. Maybe I need a few other colors, too….

Update: Still haven’t made a pink one, but I made a leopard one and a yellow corduroy one. What can I say? I love a clutch bag. 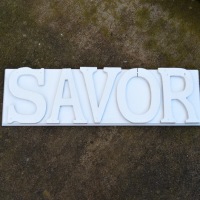 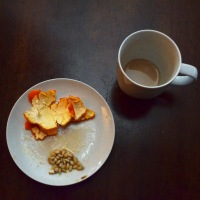