As promised, I’m back with another skirt redo.

I thirfted this skirt a few years ago, and I’ve worn in often. It is not quite as pink as it appears in these photos, more of a dark cranberry or wine color. And even though there are sequins, it’s pretty casual and can pair well with lots of different colors.

But there were two big problems.

First, it was too big. And when I started looking at deconstructing it, I realized it was too big for its previous owner as well – she did a little stitch work on the waistband that I never even noticed. The second problem was the zipper – it kept getting stuck. Since I’m not the best zipper installer, I opted to just remove the waistband entirely and use my newly beloved 3-inch elastic.

Here’s what I did:

1. Remove the flower. It wasn’t going to work with the new waist, but I think I can use it for something else soon.  Stay tuned! I also cut off the beading on the waistband and tied it off so it wouldn’t unravel and fall apart when I did step 2. 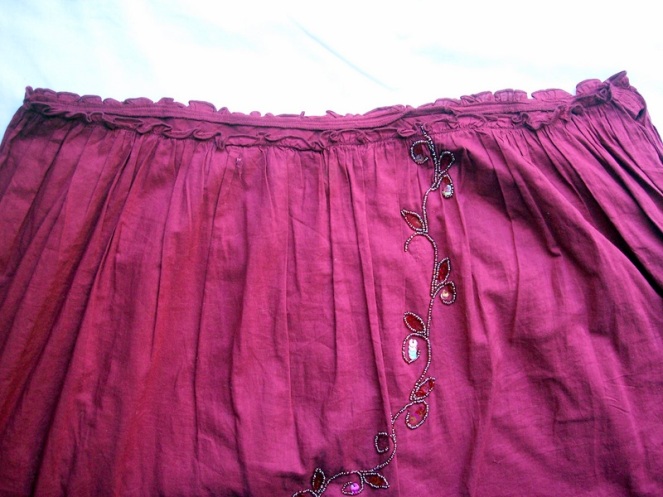 2. Cut off old waistband. I could have seam-ripped it, as I love to do, but it was very tedious as a serger had been used to attach it, so there were millions of threads to cut, and I didn’t want to risk losing the ruffle.  So I just cut the fabric as closely as I could to the ruffle and called it good.

3. Measure and sew new waistband from elastic. I followed the same technique I used in the green vintage skirt.

4. Pin elastic to skirt. This time, I attached the elastic on the inside of the skirt so the ruffle would still be visible at the top. I used the same chalk marking technique as before.

5. Sew elastic to skirt. This time, I used cranberry-colored thread and, following the same stitch line that was used to create the ruffle originally, I sewed on top of the skirt.

Easy peasy! It’s such a simple fix that I’m going to use it for one more skirt redo this month. I mean, I bought 30 feet of it, I’ve got to use it for something!